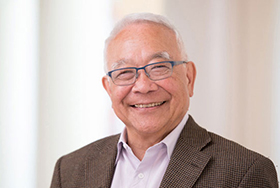 As UCSF’s first vice chancellor for Science Policy and Strategy, Keith Yamamoto leads efforts to anticipate the needs of an increasingly dynamic biomedical research endeavor, and to position UCSF optimally, by working within the University as well as influencing and shaping science policy at the state and national levels and beyond.

Throughout his career, Yamamoto has been focused on the practice of science, science education and mentoring, peer review, communication of science, and advocacy for federal support for research. He also directs a basic research lab, making groundbreaking discoveries focused on signaling and transcriptional regulation by nuclear receptors.

Yamamoto has long been a voice for science policy that emphasizes integration at three levels: 1) basic, clinical, and social/behavioral/population research; 2) a merging of the concepts and approaches of physical sciences, engineering, and computation/math with those of the life sciences; and 3) effective partnerships between academia, industry and government. He believes that such integration will produce transformative scientific advances with potential to address urgent societal challenges.

After earning his PhD from Princeton University, Yamamoto joined the UCSF faculty in 1976. He has served in several significant leadership roles including chair of the Department of Cellular and Molecular Pharmacology, vice dean for research in the School of Medicine, and vice chancellor for research. He chaired the committee that led the planning of the UCSF Mission Bay campus.

Yamamoto has chaired or served on numerous national committees focusing on a wide range of areas (i.e., public, and scientific policy, public understanding and support of biological research, science education, training the biomedical workforce, research funding, and the process of peer review at the NIH). He chairs the Coalition for the Life Sciences and sits on both the National Academy of Medicine Executive Committee and the National Academy of Sciences Division of Earth and Life Studies Advisory Committee. As Chair of the NAS Board on Life Sciences, he created the study committee that produced Toward Precision Medicine: Building a Knowledge Network for Biomedical Research and a New Taxonomy of Disease, the report that enunciated the precision medicine concept, and he has helped lead efforts to implement it at the state and national level as well as at UCSF.