Kim Acquaviva doesn’t typically take speaking engagements at other colleges, but when the nursing professor at George Washington University saw the request from Lynda Sowbel, she knew she had to make an exception.

Dr. Acquaviva’s mother, Jean Ellen Holt, was a 1966 graduate of Hood’s social work program. “My mother had such fond memories of Hood,” Acquaviva said, “it made her who she was.”

To prepare to speak to Sowbel’s Gerontological Social Work class on the LGBTQ aging issues, Acquaviva made a trip to her safe deposit box, where she keeps the patch from her mother’s Hood blazer. She started her talk to the class by sharing the patch. “It is the only memento I have of my mom’s time at Hood.”

Dr. Acquaviva spoke to the class about the lack of education some healthcare professionals, faith communities and facilities for older adults had when it came to speaking to LGBTQ seniors. She emphasized that most LGBTQ people seen by healthcare providers are coming in for diabetes or a broken ankle and not necessarily for something related to their gender identification of sexual identity but that questions asked or assumptions made may mean that population is more reticent to use services. She also mentioned isolation and having to return to the closet as related to the extreme vulnerability that comes with dependency if one needs services.

“Dr. Acquaviva is a dynamic speaker and an authority in the field of LGBTQ end-of-life palliative care. She brings a natural openness and social justice advocacy that models working within and outside of the borders of our service systems,” Dr. Sowbel said. “She helps model the balance necessary to influence social change as a social worker on a micro and macro level. She inspires students to delve  into the uncertainties and ambiguities in working with imperfect systems and to commit yourself to the complexities of human identity and transaction. We were so fortunate to have this Fullbright Scholar and GW teacher of the year share some of her wisdom with us.”

Acquaviva is both Founding Faculty at GW Nursing and the first non-nurse to receive tenure at the school. As a social worker teaching within the school, Dr. Acquaviva’s research and scholarship are interdisciplinary and collaborative. 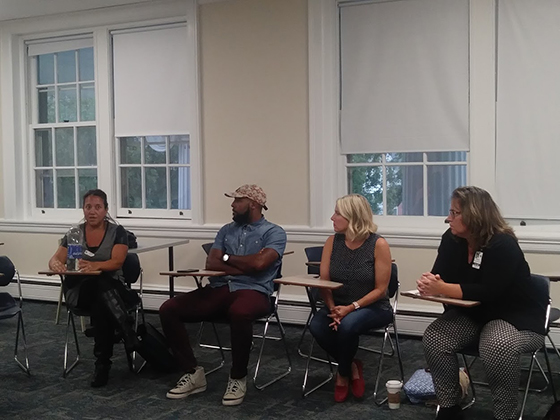 When people think of the work that social workers do, they often think of one-on-one interactions with one person. However, social workers are trained to work with populations of many sizes.