Professor of French and Arabic 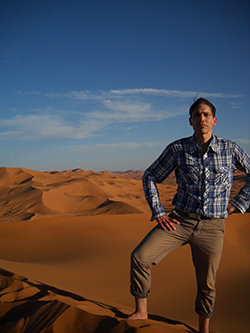 I have taught and given lectures at many institutions in Europe and the Middle East. I have worked in many museums, including the Louvre in Paris. I am the author of two books, the most recent of which, Antiquité moderne, is a study of what role ancient ruins play a role in nation building and colonialism in the Mediterranean Basin in the 19th century. I am currently working on a book that is a critical study of urban development in the Middle East. Among my many experiences in the Middle East, I have travelled to Iraq documenting human rights violations of victims of ISIS combatants and taught a course on the impact of the Guantanamo prison on populations in the Middle East and their view of America in Beirut, Lebanon. I have been invited to give lectures at various conferences in the United States, Europe, Africa and Asia. I teach Arabic and Cultures of the Middle East. In addition to teaching French and Arabic, I am Director of the Arabic and Middle Eastern Studies Program, Chair of the Department of Global Languages and Cultures and direct of graduate-level ESL program for international students.