In the NeighborHOOD: Meet Claire Hudson

What brought you to Hood College?

This is a long story! In 2005, I arrived in the U.S. from Dubai, which is where I was living at that time, and three days later, I attended a career fair at Brookside Gardens in Wheaton, Maryland. There I met Dr. Ferrer and Dr. Kindhal, who had a table representing Hood College and a display highlighting all the wonderful things they were doing. They both showed such passion and excitement about Hood College that I just had to check it out. The next day, after meeting with them, I applied for a graduate assistantship with the biology department. After an interview and an invitation to the biology department’s picnic, I fell in love with the campus, the community, the energy of the faculty and staff, and the buzz of the students. I was lucky enough to have been offered the assistantship position in the department! One month after I arrived in the U.S., I found myself working and learning at Hood College. I graduated in 2007 with a Master of Science in Environmental Biology, at which time I was keen to stay on at Hood. I taught a few classes as an adjunct and waited patiently for an opportunity to stay. In 2011, I became the part-time coastal studies program coordinator and in 2013, I took on the position full time.

What do you value most about your relationship with students?

One of my most favorite things about working with students is seeing them grow! The students I have the privilege of working with are some of the most energetic and dedicated people. I try to keep in touch with many of my students so I can see what they get up to after college. I am consistently impressed and proud to see the careers they go on to.

Describe your approach to teaching.

I use various teaching methods, which range from traditional lectures to hands-on learning in a creative setting. My favorite thing to do is teach outside. We often take class outside, be it on a boat or walking through the forest. I strive to provide students with meaningful experiential learning—teaching the theory and following it up with the reality and practicality of authentic experiences. For example, when I teach about barrier islands, we leave the classroom to go and explore one!

What is your most memorable moment at Hood?

My most memorable moment at Hood was defending my thesis in front of who are now my colleagues ... Yikes, that was a stressful yet fun day!

My academic research and interests include water quality, cyanobacteria and toxin analysis of our lakes and reservoirs, urban agriculture and rainwater re-use. I am passionate about finding solutions to environmental and social problems such as food insecurity, sustainable agriculture and environmental health.

When you aren’t teaching, what are you passionate about?

When I am not teaching, I spend my time working with my colleagues on a myriad of projects such as community gardening, urban agriculture, water quality monitoring, water quality analysis and field work.

What three books would you recommend be on everyone’s reading list?

The Omnivores Dilemma, Diet for a Hot Planet and Chesapeake Bay Blues

What is your favorite children’s book?

The Faraway Tree by Enid Blyton

What is your favorite spot on campus?

What is your favorite place in Frederick?

People In the NeighborHOOD 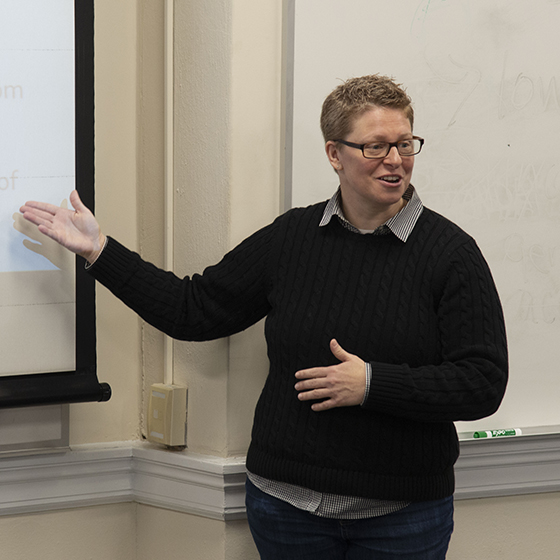 In the NeighborHOOD: Meet Michelle Gricus