How will you spend your summer? Are you interested in doing something besides hanging out with your friends? Get a jump on your future by researching the causes of cancer. Or investigating the suitability of sea anemones as indicators of coral reef health. How about studying about the ecology of chestnut trees? These are just some of the research projects students have participated in during Hood's Summer Research Institute (SRI).

The SRI allows students to work one-on-one with a faculty adviser in a research project. Students engage in research in the laboratory or in the field for eight weeks during the summer (from about mid-June until mid-Aug.). We encourage collaboration and communication between research groups through informal discussions of current research projects, the history of science and the role of women in science.

Students and faculty also get together for fun! In previous years, we have had picnics, field trips to the National Aquarium in Baltimore, a float trip on Antietam Creek, an outing to see the Frederick Keys play baseball and a science fiction film series.

Applying to the Summer Science Institute

The SRI provides students with a $2,500 stipend and free housing. Any Hood undergraduate is eligible to apply. Admission is competitive; we receive about twice as many applications as there are spaces in the program. Applications for Summer Research Institute are due each year in March.

One of the on-going, on-campus projects related to biofuels production is a collaboration between Hood College faculty and students and a local company, Atlantic Biomass Conversions, Inc. This USDA-funded research is working toward sustainable and economic production of biofuels from agricultural wastes such as sugarbeet pulp. These renewable sources of biomass can be used to produce carbon-neutral, liquid transportation fuels; a substitute for petroleum-based, non-renewable, carbon dioxide-generating fuels such as diesel and gasoline. However, in order to be viable, these alternative fuels must be cost-competitive.

Specifically, Hood students are genetically engineering the carbohydrate binding modules of cellulases to facilitate their reuse. This is important as the expense of the enzymes used to convert the complex biomass to simple sugars constitutes a substantial fraction of the overall cost of producing second generation biofuels. Successful recovery and reuse of the enzymes for multiple batches of biomass will be a big step toward making these fuels a marketplace reality.

The students pictured below (and many more) worked together on this project. We are hoping to add your face to the picture for future semesters! 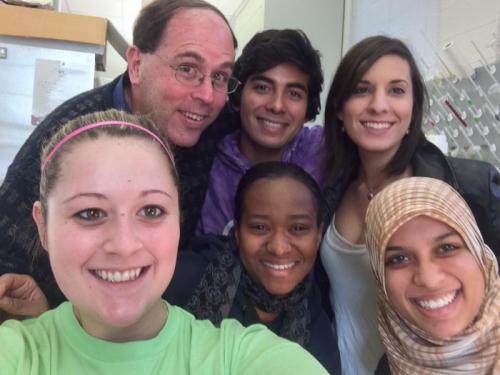 We are currently performing an industrial hemp research project supported by the Maryland Energy Innovation Institute – Energy Innovation seed grant with the University of Maryland Eastern Shore (Dr. Schwarz’s group and Dr. Dhekney’s group), Hood College, and Atlantic Biomass Conversion, Inc. This supports a partnership to study the potential for converting industrial hemp into bioethanol and the scaling up the process to an industrial level. The project aims at building capacity in biofuel production from hemp biomass waste and optimizing technologies that processing units can fit into their existing operations to generate a value-added product. In particular, industrial hemp biomass exhibits higher production of fermentable sugars compared to traditional biofuel crops such as switch grass and shows great promise to be converted into biofuel. 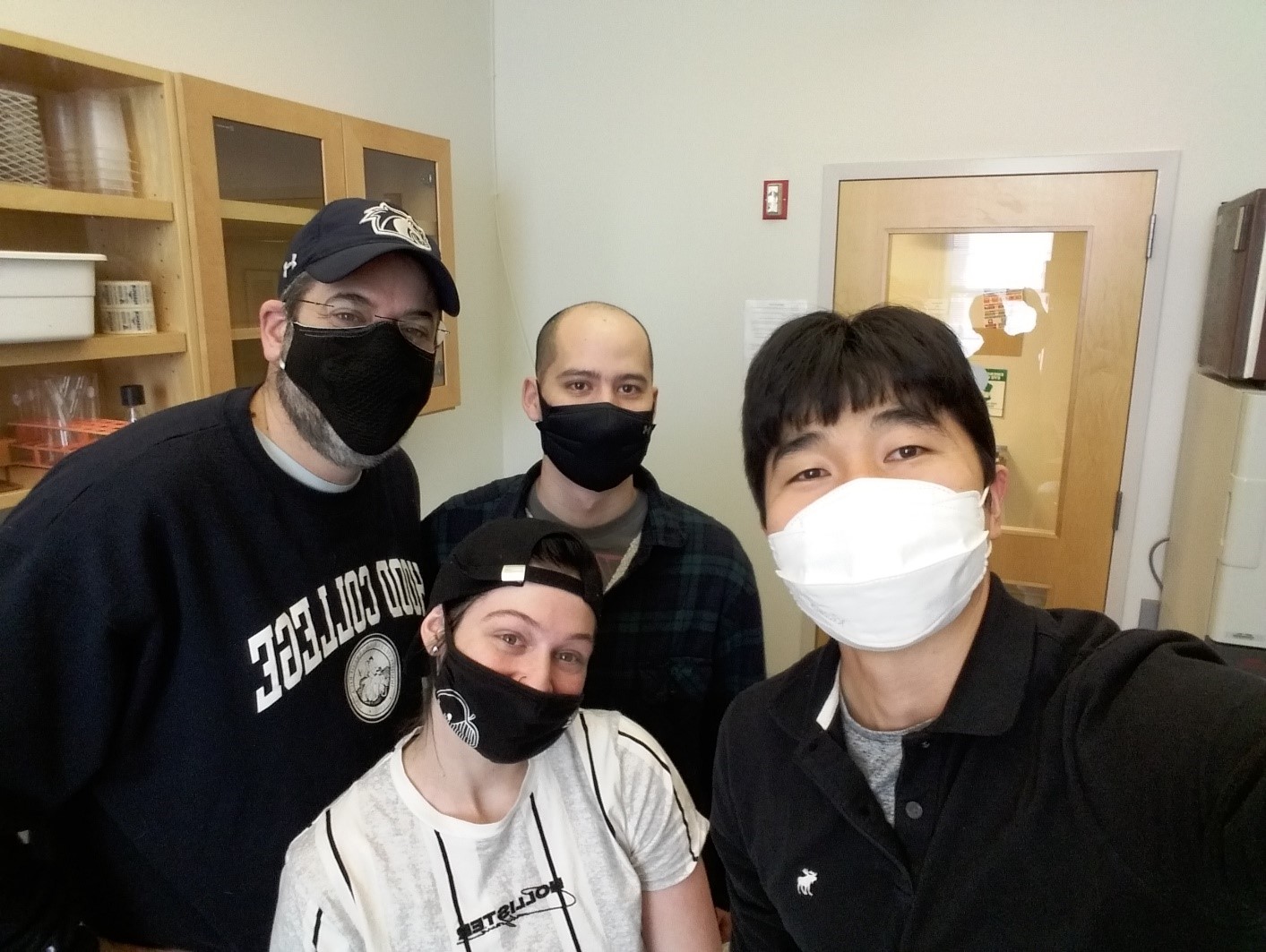 If you have ever marveled over the myriad organisms found in coral reefs, sea grass beds, mangrove swamps and rocky intertidal and sandy beaches, and are curious to learn more about them, Hood's Tropical Marine Ecology course is for you!

This 3-credit course is open to both undergraduate and graduate students. It begins on Hood's campus with a week of introductory lectures and readings, followed by travel to the Bahamian Field Station on San Salvador Island for an intensive 10-day field experience.

Students integrate previous lecture material with personal, on-site observations to gain a better understanding of the complex interactions in marine ecoystsems. In addition, students take part in a collaborative research project that is carried out in the field.

Imagine white sand, turquoise water, a tropical climate and incredible sights to see around every corner, not your ordinary classroom setting, but all part of this extraordinary course, Tropical Marine Ecology.

Hood College has a strong commitment to the Frederick community. Testament to that commitment is our faculty's involvement in local organizations. The biology department has developed a number of local collaborations that provide our faculty and students with unique opportunities for research and internships.

In the fall of 2020, Hood entered a partnership with the Audubon Society of Central Maryland. Students and faculty will have the opportunity to become involved in new and ongoing projects on the 270 acres of wildlife sanctuary that the ASCM maintains within 20 minutes of Hood's campus.

Betsy Estilow is a member of the board of directors for the National Museum of Civil War Medicine, located in Downtown Frederick, and has been involved with the museum since 1994. It might seem odd that a biologist is interested in Civil War history, but not if you know Ms. Estilow — one of her specialties is the history of medicine.

Catoctin Mountain Park is located just north of Frederick on Route 15. Numerous faculty are collaborating with park personnel on research and educational projects, including Professor Eric Kindahl who also conducted a salamander monitoring project there.

The Frederick Cancer Research and Development Center of the National Cancer Institute, the U.S. Department of Agriculture Agricultural Research Service and the U.S. Army Medical Research Institute of Infectious Diseases are all located within Fort Detrick, just 10 minutes from campus.

These state-of-the-art facilities provide our faculty and students with unsurpassed opportunities for research. Hood faculty and graduate students have collaborated with scientists from Fort Detrick on a number of projects, including investigations of plant pathogens, population genetics of large cats and other important studies of agricultural issues, human health and conservation biology.

Undergraduates also participate in research at Fort Detrick, through internships and jointly sponsored research experience. In addition to cutting-edge laboratory facilities and scientific expertise, Fort Detrick has a comprehensive library that is available for public use.

The Carroll Creek Wildlife Park (CCWP) began in 2002 as a restoration and rehabilitation project of a local Frederick cow pasture. The project envisioned a passive recreation area that would ultimately serve as an environmental educational center, and as a link to alternative regional transportation.

The site is located behind the Frederick County Health Department building at 305 Montevue Lane. It encompasses approximately 40 acres of historical pastureland and 3,000 linear feet of the main stem of Carroll Creek. Habitat restoration, riparian buffer establishment, invasive plant eradication, wetland enhancement, and the construction of a wildlife meadow have all been completed at the site, which is open for public exploration.

The environmental science senior seminar classes at Hood College have worked on the CCWP project for more than a decade. Students collected baseline data on water and habitat quality before restoration began, and incorporated that data into restoration plans. The construction phase of the project was completed in 2004-05, and senior seminar students continue to monitor the progress of the site. Over time, many important metrics of environmental health have improved dramatically, thanks to the restoration efforts.

This project was supported by the EPA and the following organizations: the State of Maryland Department of Natural Resources, Frederick County Department of Parks and Recreation, the Chesapeake Bay Foundation, Potomac Valley Fishing Club, Community Commons, and Hood College.

Over the course of the last three centuries, population growth has caused the CCWP site to evolve from a oak-forested wild area, to a functioning agricultural field, to its current state as an urban stream site. Until the early 2000s the site was used for agricultural grazing adjacent to the Frederick County Health Department building.

The following direct download resources are appropriate for elementary and middle school students.  The Kid-Friendly Flower Guide is appropriate for all ages, but geared toward a younger audience.

Created by the senior seminar students:

Websites that contain useful environmental resources for teachers and educators:

The goal of restoration is to restore a natural environment to a previous condition and reverse environmental degradation caused by human activities.  The first problem of restoration is deciding on a desired baseline.  Human activity will always be a factor in the natural environment, so this baseline must be realistic and take human influence into account.  Once a baseline is proposed, a plan is made to reconstruct the area.  Reconstruction in a tributary environment like the CCWP usually involves planting trees, stabilizing stream banks, and altering stream flow and sinuosity (how winding the stream flows).  The overall goal is to repair the function of the riparian buffer zone and increase habitat diversity, hopefully restoring biological diversity as well.

Why is conservation and restoration useful?

Environments in a healthy condition offer much more to humans then degraded ones.  The goal of restoration is to restore a degraded environment to a more useful state.  When in proper condition, a healthy riparian zone offers protection from flooding and drought.  The trees along the banks stabilize the soil, reducing erosion and sedimentation downstream. Trees and vegetation remove pollutants and excess nutrients from land runoff, which reduces nitrification downstream.  Roots and vegetation along the bank can create habitat for invertebrates and fish.  Invertebrates are an important food source for fish, and fish become a valuable recreational activity for people enjoying the natural environment, as well as a possible source of revenue for parks and landowners.

What are ecosystem services?

Ecosystem services is a term used to describe the services the environment offers people for free just by doing what a healthy ecosystem does naturally.  When a natural environment is healthy, riparian zones offer buffering from flood and drought, and clean land runoff so the water downstream is healthier for those ecosystems.  Ecosystems downstream, notably the Chesapeake Bay, can become highly degraded by upstream pollutants and effluents.  Managing this problem can be quite costly when upstream environments are degraded.  By resorting upstream environments, ecosystem services are restored, and the water downstream is cleaned at the source.  In the long run, these restored areas become economically beneficial, because what we spend millions of dollars trying to fix – such as cleaning water through treatment plants or dealing with algal blooms after they happen – the environment can mitigate for free.