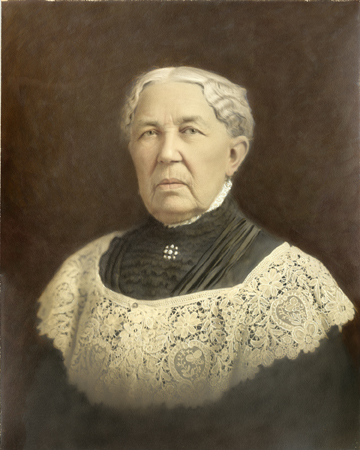 Margaret Scholl Hood, for whom Hood College is named, was one of Frederick's earliest philanthropists, known for her generous, thoughtful and discriminating philanthropy; interest in and concern for others; zealous support of good works; and cheerful and lively nature.

Margaret Elizabeth Scholl Hood was born July 7, 1833, the only child of Daniel and Maria Susan Thomas Scholl. A lifelong resident of Frederick County, Margaret lived most of her life at Manchester Farm on New Design Road. Her formal education began in a school operated by Hiram Winchester on North Market Street. She later attended Thorndale, a boarding school in Carroll County, Maryland.

In 1847, when Margaret was 14 years old, she enrolled as a boarding student at the Frederick Female Seminary, which was operated by Hiram Winchester on East Church Street. She graduated two years later; in 1849 this was considered a very adequate education for a young lady. Census records from 1840 through 1860 show that Daniel and Maria Scholl’s household included three or four enslaved persons.

Interested in civic affairs, her church and education, Margaret was a charter member of several local organizations, including the Art Club, the Historical Society of Frederick County, Inc., the Home for the Aged, and the Ladies Auxiliary of the Home for the Feeble Minded in Owings Mills, Maryland.

On October 21, 1873, she married James Mifflin Hood, a native of Baltimore and widower with several grown children. He was the owner of the successful firm Hane and Hood, which built and serviced carriages and wagons.

A believer in responsible stewardship, Margaret prided herself in being well-informed on all the activities of her church, now the Evangelical Reformed Church, United Church of Christ. The schools, colleges, theological seminaries and orphan’s homes sponsored by her church, and the church’s home and foreign missionary operations were all beneficiaries of her philanthropy.

Margaret's alma mater, the struggling Frederick Female Seminary, closed in 1863 after serving as a hospital for wounded soldiers following the Battle of Antietam. The seminary was reopened in 1866 with Rev. Thomas M. Cann as its president. He introduced many innovations, including a library and a college newspaper. He helped with the formation of an alumnae association, known as the Pioneer's Club, which was one of the first women's clubs in the United States.

In 1893, when the seminary could no longer afford to operate, the buildings and equipment were leased to the Board of Directors of the Woman's College of Frederick, operated by the Potomac Synod of the Reformed Church in the United States. The synod had decided to eliminate the women's part of Mercersburg College in Pennsylvania and instead establish a college for women below the Mason- Dixon Line. The synod commissioned Joseph Henry Apple, a 23-year old mathematics teacher from Central High School in Pittsburgh, to recommend measures for establishing such an institution. Professor Apple helped in its formation, and then accepted the presidency of the newly formed college. The Woman's College of Frederick was officially incorporated Jan. 12, 1897 and its first four-year class graduated in 1898. The seminary continued as a preparatory department of the College until 1920.

Margaret was especially interested in the management and development of the newly founded College. In January 1897, she contributed $20,000 to what was to become the James Mifflin Hood Endowment Fund, which was established in October 1896 at the request of the Potomac Synod. In the following year, when the Potomac Synod issued a challenge from the Church to provide maintenance funds, Margaret contributed an additional $5,000. She also took a keen interest in raising funds for the establishment of additional buildings, purchasing new land and remodeling Brodbeck Music Hall. She contributed $10,000 toward the building fund on condition that the community contribute at least an equal amount.

In 1912, in recognition of Margaret's generous support, the Potomac Synod, at the request of its Board of Directors, adopted a resolution giving authority to change the name of the College to Hood College. The College's charter was amended in May 1913.

Margaret passed away January 12, 1913. Her will provided an additional $30,000 for the College, which was the impetus for President Apple to begin building Shriner and Alumnae Halls.

Margaret's philanthropy and charitable efforts extended to many other causes in the Frederick community and beyond. She was a charter member of the Frederick Art Club; one of the organizers of the Historical Society of Frederick County; contributed to and served on many Reformed Church committees; and was one of the founding members of Frederick Memorial Hospital, eventually giving the James Mifflin Hood wing and later the Margaret Hood wing to the hospital. To Franklin and Marshall College she gave $15,000 for an observatory in memory of her father, she contributed to the seminary at Lancaster and to the academy at Mercersburg and was interested in the establishment of the C. Burr Artz Library by her relative, Margaret Catharine Thomas Artz.