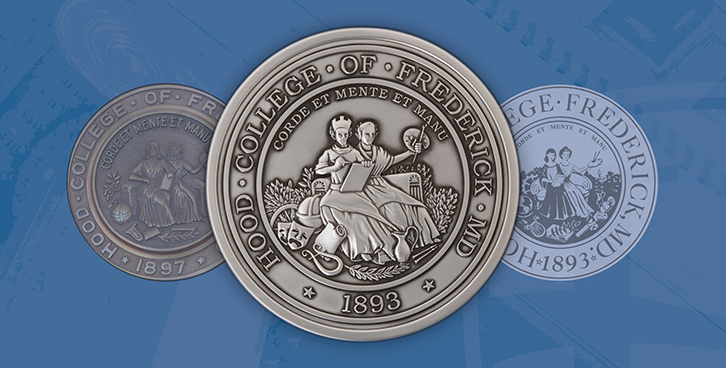 No one today knows precisely where Jacobine Holly, a Frederick Woman’s College faculty member from 1893 to 1899, came up with the art work for the original College seal. What is known, thanks to notes from the College’s first president, Joseph Henry Apple, is that Holly took the main image used for the center of the seal from a magazine that she may have brought with her when she moved to the U.S. from her native Germany. Apple also credits Holly with coming up with the College’s motto. It appears that the seal came into use around 1912.

This transcription of President Apple’s notes, believed to be from around 1910 and at about the time Holly left the College, sheds light on the origins of the seal and the motto: “Corde, et mente, et manu, freely translated (is) with heart and mind and hand; the heart to conceive, the mind to direct, and the hand to execute. The college seal was adapted from the cover of a German magazine of hers, and represents a man and woman seated amid products of invention, industry, discovery, literature and art.”

The original and a subsequent seal, presumably an adaptation of the original he references, features two women. The newest version of the seal features a woman and a man, as the original version did.

Former library director Jan Samet O’Leary compared the three major versions of the seal (the “1897” version that dates from around 1915—it appears on the cover of the 1916 Touchstone; the 1948 version—from the 1948 yearbook; and the “modern” version, apparently from the 1980s). In 2014, senior graphic designer Kit Peteranecz, Samet O’Leary and then-executive director of marketing Dave Diehl collaborated with the minting company Medallic Arts to come up with this new version, which they believe is true to the original art work and evokes the mission of Hood College. Similar to the original, it incorporates the symbols of the Greek Muses, the goddesses who provided inspiration for literature, science and the arts.

This most recent design, which was reviewed and approved by the College’s Board of Trustees, senior administration and alumni executive board, is intended to reflect Hood’s mission and to be representative of all of the College’s constituencies.